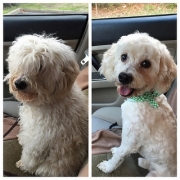 I recently had a look through last year’s database to see how it compares to this year’s numbers. Here’s what I found:

So 2015 distributions look like they will be “less fluffy” (in aggregate) than 2014.  Unfortunately, these average numbers are not comforting if you happen to own those funds with hairy distributions.

photo credit: Grooming Before and After via photopin (license)

In The Doghouse! Largest Estimated/Actual Distributions of 2015.
Scroll to top